“Nothing happens until something moves.”

There are four fundamental physical forces – gravity, weak nuclear, strong nuclear, and electromagnetic. Each force defines how the universe evolves and functions. A slight change to even one of these forces could cause chaos. In many ways, the Federal Funds Rate, the ultimate risk-free return, can be thought of as the fundamental gravitational force in financial markets. Changes to this fundamental value, especially rapid moves, cause significant ripple effects. These ripple effects have ushered in a difficult period for owners of diversified portfolios since they have driven significant negative returns from both equities and fixed income, the key building blocks for any liquid portfolio.

The Federal Funds rate is set to continue to increase for at least the remainder of this year and will likely reach 4.5% or more by the end of 2022. In comparison, the rate was 0.25% in March of this year. The dramatic and rapid shift signals a regime change for markets. We are exiting a 13- year period of low interest rates that supported elevated valuations and are entering a new era of structurally higher rates, persistent inflation, and lower profit margins. This shift will have an impact on portfolio returns for the foreseeable future.

In this update, we review 3rd quarter market performance, discuss the forces that have driven markets since the Global Financial Crisis (GFC), assess changes that we see in critical global economic forces, and highlight potential opportunities as the new regime unfolds.

After the worst first half of a year for diversified portfolios in the modern era, equity and fixed income markets continued to struggle in the third quarter. Stocks rallied in July and early August, but inflation continued to run near record levels prompting the Fed to reiterate its singular focus on reigning in the steep rise in prices. This led investors to resume selling stocks and re-pricing fixed income.

Highly valued growth companies continued their correction while sectors such as energy, health care, and financials showed more stability. The US dollar continued to march higher which hurt international equity performance as returns were translated from foreign currencies back into dollars. The strength of the dollar has been a consistent headwind for international assets and shows no immediate sign of reversing.

However, the dollar will not rally indefinitely, especially as other global central banks begin to raise rates, but it is likely to remain elevated at least through the remainder of 2022.

While equity markets garner the headlines, the most remarkable story this year is the pain inflicted upon bond markets. The US aggregate bond index is down almost 15%, an unprecedented correction in that market. The pace of change caught investors off-guard, but it is likely that investment grade fixed income markets are closer to a bottom than the equity market. With the yield curve currently inverted (a situation where short-term bond yields are higher than longer-term yields), it may signal that long-term yields are close to peaking for this cycle.

The end of the low-interest rate era has completely altered market dynamics in a few short quarters. For the past twelve years, low yields pressured investors to buy stocks at increasingly elevated valuations. Today, high quality fixed income is providing meaningful yields, and portfolio managers will likely remain cautious until the Fed reaches the end of its tightening cycle. 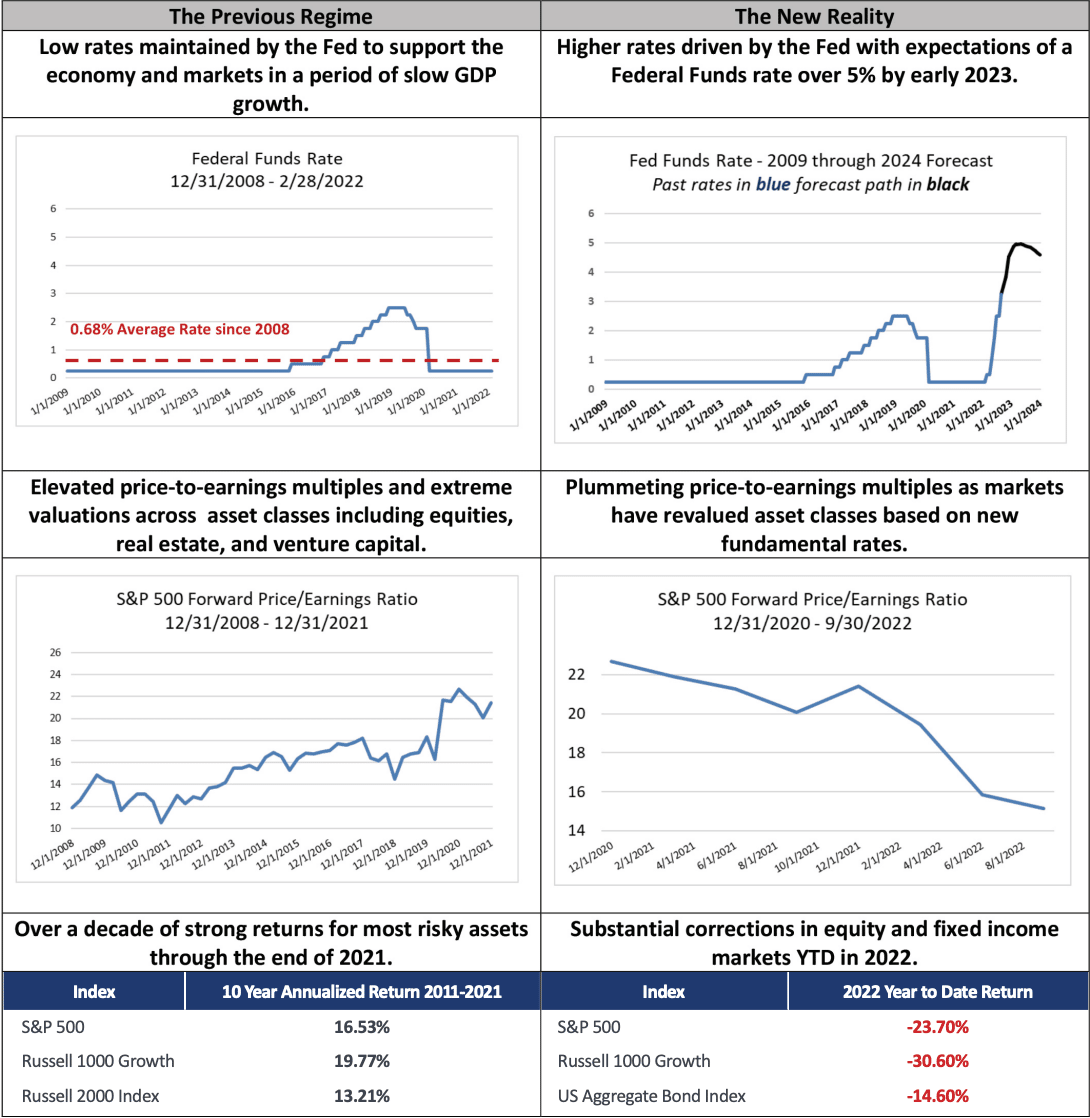 Global dynamics are changing as rapidly and drastically as domestic monetary policy and will have a significant impact on markets and portfolios. Several fundamental trends that have supported global economic conditions over the past twenty years seem to be reversing. These include:

1) Globalized supply chains: Just-in-time supply chains stretching from Europe and North America to China enabled firms to be efficient in their use of capital and provide most goods at an extremely low price point. Disruptions to these supply chains due to the pandemic and increased geo-political tensions are forcing firms to hold more inventory and bring some production closer to end markets. In short, supply chains will be more expensive in the future.

2) Access to new sources of labor: Since China joined the World Trade Organization (WTO) in 2000, companies have benefitted from the movement of China’s enormous rural population into the modern urban workforce. Due to China’s one child policy, their working age population has already peaked and western firms will find it harder to find other countries with the scale that China had been able to provide. In short, labor will be more expensive in the future.

3) Cheap, secure, and abundant energy: The shale revolution in the US helped augment global reserves of oil and natural gas and lead to an extended period of relatively low energy prices. Global efforts to increase the pace of the energy transition will be inherently expensive as we must invest in significant new infrastructure to generate, distribute, and store electricity produced by renewable resources. In short, energy will be more expensive in the future.

Unfortunately, these reversals are all happening at the same time and seem to be self-reinforcing. These new dynamics will likely bring stubbornly higher inflation, higher structural interest rates, lower corporate profit margins, and lower valuations on equities and other risky assets. There will be new opportunities for investors, but these will almost certainly not be in the same areas as the low-rate era from 2009 – 2021.

Opportunities in the New Era

After the historic correction in fixed-income markets this year, bonds are now far cheaper than they were just six months ago. Short-term US Treasuries now yield 4.5%, and investment grade and other high-quality corporate fixed income yield above 5%. After a decade of not receiving much income from the fixed-income slice of a portfolio, adding exposure to parts of the bond market is once again attractive. Riskier portions of the fixed income universe including high yield bonds, structured credit, and mortgage debt will also become increasingly attractive.

US equity markets have outperformed international markets over the past 13 years, and will likely continue to do so in the short run. Europe is in a recession and facing a winter of extreme energy prices while emerging markets are struggling with higher funding costs due to the strong dollar. While we remain cautious on rotating into international markets at this time, the strength of the US dollar and outperformance of US equity markets will peak at some point. It is quite likely that in the next two years adding to international equity holdings will be an appropriate response to the new fundamentals. Finally, in private markets, the fundamentals of the new regime will support attractive returns in private credit, real estate equity, select traditional energy assets, and infrastructure related to energy transition and related electrical grid upgrades.

Sublimation is a phase transition where matter changes from a solid directly into a gas without transitioning to a liquid. It can be a rapid process and seems almost unnatural to witnesses. We are seeing a similar phase transition in financial markets, shifting into a high interest rate environment with shocking speed. The process has been surprising and painful, and we are hopeful it is nearing completion.

The Federal Reserve gave an indication at its November meeting, where it raised the Fed funds rate 0.75% to 4.00%, that it would likely be slowing the pace of rate increases soon. The Fed was also clear that it anticipates targeting a higher peak rate than the market projected. This is a mixed message, but one that implies we are close to a high in short-term rates. This would allow the economy and markets to catch up to the new reality and assess the corrections that have occurred this year.

Markets had a solid October and a positive reaction to the inflation data on November 10th. This serves as a reminder that for long-term investors it is important to hold on through volatile periods because predicting a market low and getting in at the perfect moment are skills that most do not possess. We still expect markets to be challenging over the next few quarters, but there are positive signals on the inflation front that do provide some confidence as we approach the year end.

As we continue to move into a new economic regime, opportunities will present themselves but basic fundamentals will still reign supreme. We will continue to scan the horizon for ways to take advantage of new forces at work in global markets, and our team is here to visit with you at any time about this ever-evolving environment.